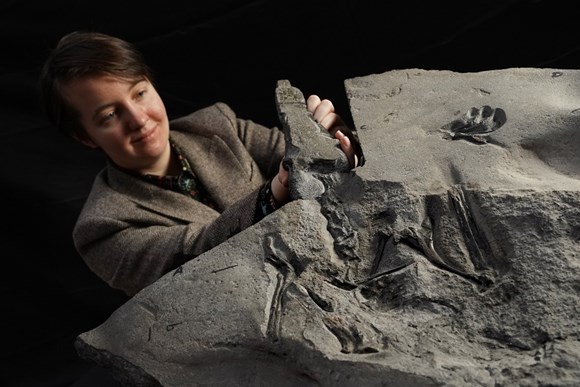 A spectacular fossil of a huge flying reptile known as a pterosaur, that was found on the Isle of Skye, is the largest of its kind ever discovered from the Jurassic period.

The giant winged creature, more popularly known as pterodactyls, lived around 170 million years ago and had an estimated wingspan of more than 2.5 metres. The fossil is the best-preserved skeleton of a pterosaur found in Scotland, experts say.

The species has been given the Gaelic name Dearc sgiathanach (pronounced jark ski-an-ach), which translates as ‘winged reptile’ and also references the Isle of Skye, whose Gaelic name means ‘the winged isle.’

The unique specimen, discovered during a National Geographic Society-funded excavation in 2017, will now be added to National Museums Scotland’s collection and studied further.

The find is described in a new paper published in Current Biology authored by scientists from the University of Edinburgh, National Museums Scotland, the Hunterian Museum in Glasgow, the University of St Andrews and Staffin Museum on the Isle of Skye.

Lead author, University of Edinburgh PhD student Natalia Jagielska, said: “Dearc is a fantastic example of why palaeontology will never cease to be astounding.

“Pterosaurs preserved in such quality are exceedingly rare and are usually reserved to select rock formations in Brazil and China. And yet, an enormous superbly preserved pterosaur emerged from a tidal platform in Scotland.”

Professor Steve Brusatte, Personal Chair of Palaeontology and Evolution, School of GeoSciences, University of Edinburgh, said: “This is a superlative Scottish fossil. The preservation is amazing, far beyond any pterosaur ever found in Scotland and probably the best British skeleton found since the days of Mary Anning in the early 1800s.

“Dearc is the biggest pterosaur we know from the Jurassic period and that tells us that pterosaurs got larger much earlier than we thought, long before the Cretaceous period when they were competing with birds, and that’s hugely significant.”

Dr Nick Fraser, Keeper of Natural Sciences at National Museums Scotland, said: “Even in the context of the amazing palaeontological finds on Skye in recent years, this one really is remarkable. To find and describe a specimen which is both so well-preserved and so significant is really special and we’re delighted to add Dearc into our collection, a unique addition to the fossil record and a specimen which will be studied now and long into the future.”

Amelia Penny, a PhD student at the University of Edinburgh, discovered the fossil during a field trip in 2017, led by Brusatte, after spotting its jaw protruding from the limestone layer on a tidal platform at Rubha nam Brathairean (known as Brothers’ Point).

She alerted colleagues who inspected and identified the head of a pterosaur. A painstaking operation ensued to extract the fossil, led by Dugald Ross of Staffin Museum, involving the use of diamond-tipped saws to cut it from the rock, all while racing against time as the tide came in.

After the fossil was salvaged, it was brought to the University of Edinburgh for analysis and description. CT scans of the skull have revealed large optic lobes, which indicate that Dearc would have had good eyesight.

The specimen will be the subject of further study by PhD student Natalia Jagielska, which aims to reveal more about Dearc’s behaviour, particularly how it lived and flew. She adds: “To achieve flight, pterosaurs had hollow bones with thin bone walls, making their remains incredibly fragile and unfit to preserving for millions of years. And yet our skeleton, ~160 million years on since its death, remains in almost pristine condition, articulated and almost complete. Its sharp fish-snatching teeth still retaining a shiny enamel cover as if he were alive mere weeks ago."

Pterosaurs were the first vertebrates to evolve powered flight, some 50 million years before birds. They lived throughout the Mesozoic era – the so-called age of reptiles – as far back as the Triassic Period, about 230 million years ago.

In the later Cretaceous Period – the time of Tyrannosaurus rex and Triceratops – and immediately before the extinction event that wiped out the dinosaurs 66 million years ago, pterosaurs grew to the size of fighter jets.

Professor Steve Brusatte, University of Edinburgh on 07858129629 or Stephen.Brusatte@ed.ac.uk